Difference Between A Blockchain Ledger and An Ordinary Ledger

The following discussion will focus on blockchain ledger vs ordinary ledger to find the core differences between them in order to shine a light on their issues and use cases.

The usage of ordinary ledgers can date back to the year 1800! People and many institutions have been using the ledger system for a very long time. Over the years, these ledgers have digitized and transformed to fit into the needs of institutions. Due to the necessity for a change, now we have blockchain ledgers that can get rid of most of the issues of ordinary ledgers.

Here, we will go through both ledger systems, discuss their working principles, and use cases to understand how they function. We will also address the fundamental differences between these two ledger systems.

What Is Blockchain Ledger?

Let’s start with the blockchain ledger first. Well, blockchain comes with a ledger system that is distributed and decentralized. It not only gets rid of the centralized concept but also offers additional transparency, data integrity, and so on.

In reality, the ledger system in blockchain technology creates a chain-like structure while storing data or records. Any kind of data added to the ledger will form this structure, thus justifying the name blockchain.

So, the primary structure of the blockchain ledger is a chain of blocks where every single block is a record or data. Therefore, every blockchain will have links to the previous block and the next block. This kind of structure makes it quite difficult to hack into or alter any data within the blocks.

Anyhow, to add more security for the blockchain ledger, all the blocks are encrypted using hashing in cryptography method. So, only the user with the right key can look into the contents of the block. By default, the blockchain ledger is immutable; therefore, no one can delete or alter any records once it’s in the system. 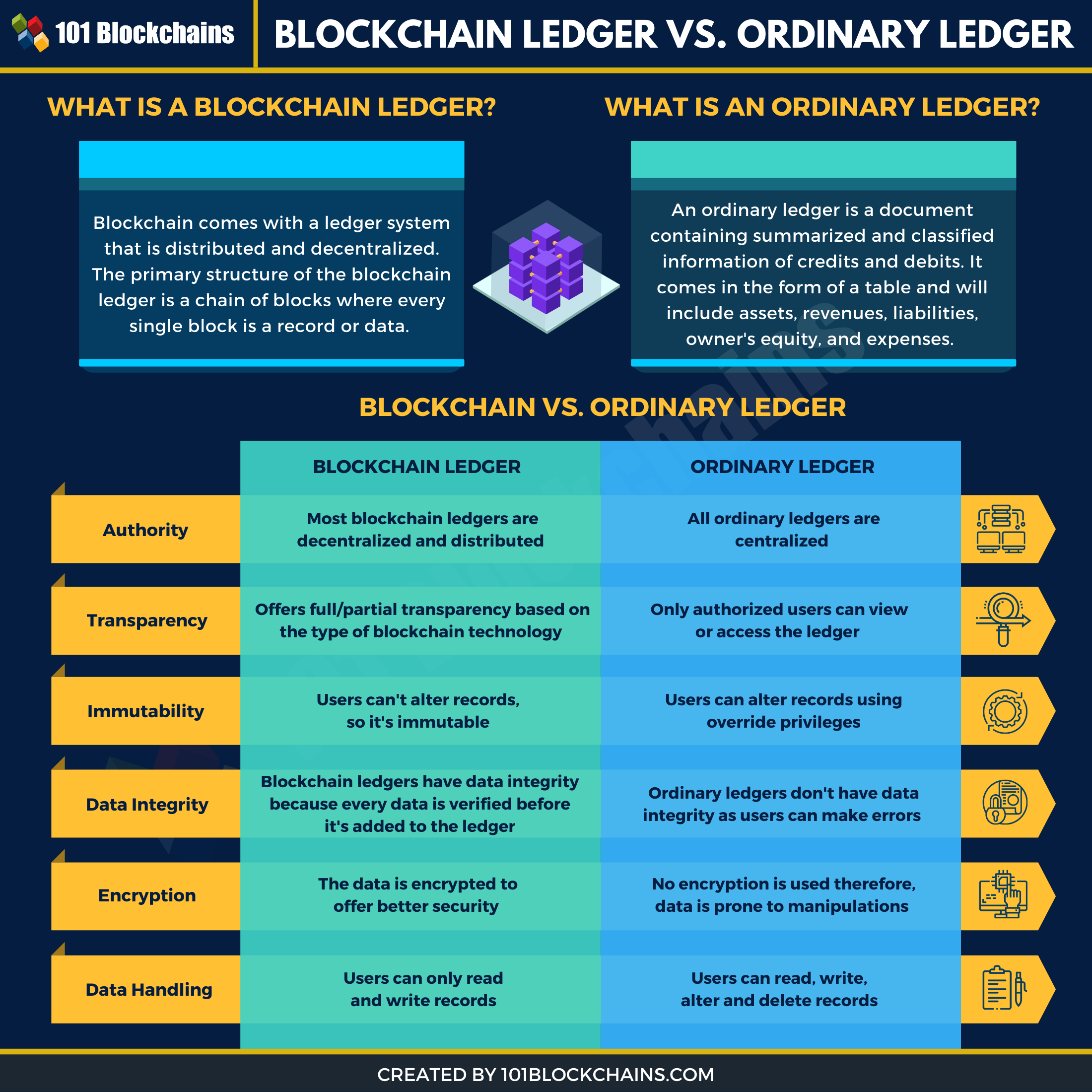 How Does Blockchain Ledger Work?

A blockchain ledger is just a chain of records, and the users or other blockchain nodes are responsible for adding the data to the ledger. Once a node asks for a transaction, the node will need a private key to authorize it. Next, the system will create a block containing all the information, encrypt it, and send it to other nodes for verification.

Now blockchain platforms may use various methods to verify the data. But once it’s verified, the blockchain is then added to the ledger, and the transaction is executed.

What Are the Benefits of Blockchain Ledger?

Well, there are certain benefits of blockchain technology ledger that you must know about. These are –

A blockchain ledger is a much more secured approach to the ledger system as it’s immutable, and no one can alter any documents or any data.

Based on the blockchain type, the ledger is distributed among the nodes. So, either the nodes maintain a full ledger or partial ledger. However, the distributed nature means it’s nearly impossible for any cybercriminals to penetrate the system.

As the records are verified before a node adds them into the ledger, thus it’s easier to track or trace any data. This is a common use case of blockchain that many industries are using; specifically, blockchain for supply chain is widely popular.

This ledger is more efficient and faster as it can store error-free data without the need for any human interactions. Next, let’s check out the definitions and working principles of ordinary ledgers in this blockchain ledger vs ordinary ledger comparison guide.

What Is Ordinary Ledger?

An ordinary ledger or a ledger is a document containing summarized and classified information of credits and debits. In reality, the ordinary ledger will contain information that you can use to prepare any type of financial statement. Typically, it will include assets, revenues, liabilities, owner’s equity, and expenses.

All of the accounts in the list are called chart of accounts, and every active account will represent the ledger. More so, an ordinary ledger can also keep records of a company’s financial statement with credit and debits. So, a company can use this type of ledger to keep track of all of their expenses and revenues, giving them a full report on the company’s financial state.

Basically, it comes in the form of a table and can be any kind of document, whether it’s manual or digital.

How An Ordinary Ledger Works

An ordinary ledger acts as the foundation of a system that accountants use to organize and store financial records. Here, the transactions are added in specific sub-ledger accounts. An enterprise company’s chart of accounts mainly defines these parameters.

All the transactions are summarized within the ordinary ledger, and the accountant will serve a report for each account with a trial balance. Therefore, you need to check the trial balance to make sure that it does not have any issues or errors and make necessary changes based on that.

Curious about how blockchain can differ from typical database? Here’s a guide to blockchain vs database that you should check out right now.

Why Use Ordinary Ledgers?

Well, a ledger is extremely important for a company or even an individual to assess their financial condition. More so, investors, regulators, and creditors can generate an ordinary ledger in order to get their financial statement. This type of information is crucial in making investment choices.

If by any chance, a business owner notices any changes, for example, a sudden rise in expense, they can use the ordinary ledger to investigate the cause of the change. Also, as the ledger is changeable, accountants or authorized personals can check for any errors and fix them accordingly.

However, this can omit the purpose of the ledger because it’s easier to doctorate false data to misuse the benefits. Next, let’s check out the comparison of these two ledgers in this blockchain ledger vs ordinary ledger comparison guide.

We will now discuss the major differences between blockchain ledger vs ordinary ledger to understand where they are suited the most. So, let’s start!

Let’s start with authority. In a blockchain ledger, there is no centralized authority. As blockchain is distributed and decentralized, it does not need any central authoritative figure to function. All the process is automated, and this gets rid of any corruption problems.

On the other hand, an ordinary ledger is fully centralized. This means that a central authority maintains the ledger and can make changes to it whenever they want.

On the other hand, as only authorized users can access an ordinary ledger, it does not offer any kind of transparency.

Once data is in the ledger in a blockchain, no one can alter or make changes to it. More so, no user can even delete the data. Thus, it ensures a form of immutability. On the other hand, any user with access to an ordinary ledger can alter or even delete the data anytime they want. Therefore, it’s not immutable, and it does not offer any security. Let’s check out the next point in this blockchain ledger vs ordinary ledger comparison guide.

As for data integrity, the blockchain ledger is surely the winner in this case. Every single piece of data gets verified before it gets added to the ledger. In reality, blockchain can use different consensus algorithms to verify the data, and this process preserves the integrity of that data. So, when a company needs to use that data, they know for a fact that there is no error or any human manipulations.

But this is not the case for ordinary ledgers. Here, humans add the data manually to the ledger; therefore, it may have a lot of errors. More so, users can even manipulate data; thus, it does not offer data integrity.

Blockchain ledger uses cryptographic hashing to encrypt all data before adding it to the ledger. This acts as a shield against any cybercriminals and offers extra protection to the users’ data. But typical ledgers don’t have this option. Therefore, if a hacker gets into the system, they can easily misuse that information for their own benefit. Let’s move on to the last point in this blockchain ledger vs ordinary ledger comparison guide.

In the blockchain, the users can only read and write records. It means they can add the transaction information and then see it later on but can’t delete it or make changes to it. So, it only supports read and write functions. But in a typical ledger, a user can read, write, delete and alter the transaction records. This is something that is not available in the blockchain.

The post Difference Between A Blockchain Ledger and An Ordinary Ledger appeared first on 101 Blockchains.

Difference Between A Blockchain Ledger and An Ordinary Ledger